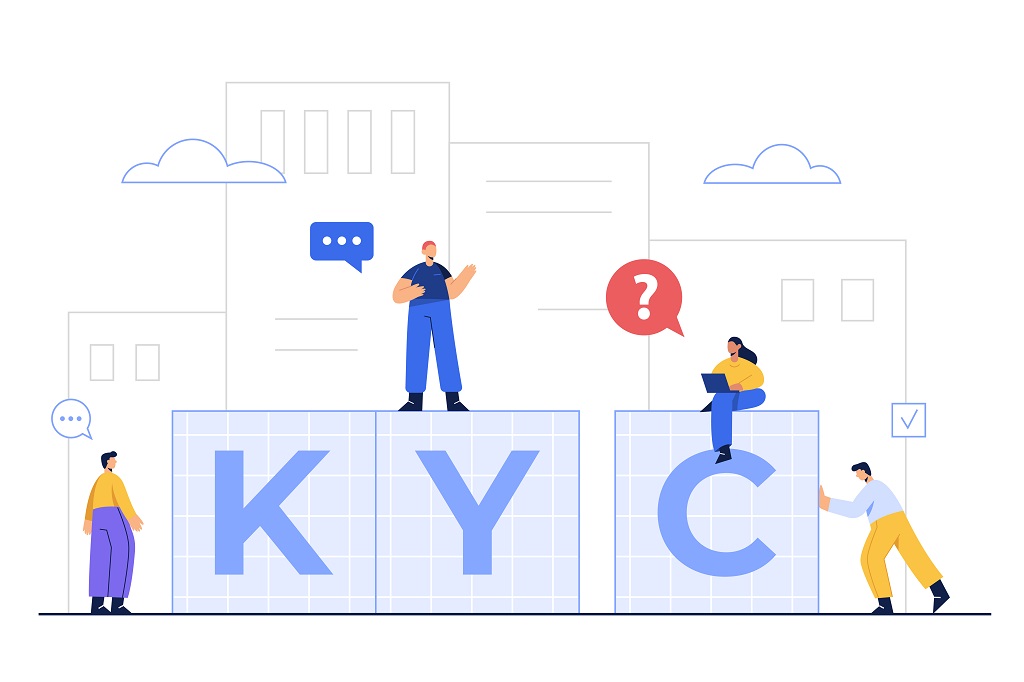 WHAT IS KNOW YOUR CUSTOMER (KYC) AND HOW DOES IT WORK IN CRYPTO?

Cryptocurrencies, which are based on blockchain technology and provide access to cutting-edge new financial products and services, are upending global financial systems. Cryptocurrencies – or the digital tokens that represent them – can be traded between blockchain users directly or through crypto exchange platforms that accept both fiat and digital currency transactions.

With global regulators paying closer attention to cryptocurrency transactions, it is more important than ever for crypto exchanges to address their AML/CFT compliance responsibilities. In particular, crypto exchanges must address the anonymity concerns associated with cryptocurrency transactions by implementing suitable Know Your Customer (KYC) processes in order to understand who their customers are, and how they are using their services.

Know your customer (KYC) refers to a set of rules that financial institutions must follow to verify the identity of bank account holders, whether they are individuals or businesses. When opening a bank account, applying for a credit card or a mortgage, or financing a car loan, the general public is used to providing this KYC information. While this is standard procedure for banks dealing with fiat currency, it has not been the case with cryptocurrency.

BUT, WHAT IS AML, ANYWAY?

Anti-Money Laundering, or AML, is a set of procedures and legal regulations in place to detect and prevent profit from illegal activities. This includes illegal trade, tax evasion, market manipulation, and the laundering of ill-gotten gains.

Regulatory bodies require financial institutions to conduct due diligence on their customers, as well as flag and report suspicious customers and transactions, in order to prevent the global spread of these activities.

As the crypto industry evolves, it is clear that virtual currencies give rise to a new dawn of financial crime—one where criminals harness technology to launder money and cover their tracks virtually.

AND WHERE DOES CFT FIT IN?

CFT is for Combating the Financing of Terrorism. While AML procedures deal with the general movement of money related to illegal activities, CFT concentrates on preventing the movement of money related to terrorism. This involves blocking transactions aimed at furthering religious, ideological, or political radical goals achieved through violence.

Closely linked to money laundering, terrorism is able to flourish when radical organizations fund decentralized cells around the world. By identifying and halting these transactions, authorities have a better chance of preventing terrorist acts from taking place.

Unfortunately, cryptocurrency poses a new way of funding terrorism, spurred on by its capacity for simple cross-border transactions. Where the propensity for cheap international transactions is the blessing of cryptocurrency, it’s also the curse that enables virtual money laundering and terror funding.

WHAT IS KYC IN THE CRYPTO MARKETS?

Satoshi Nakamoto, the cryptocurrency’s creator, wanted it to be free of financial regulations imposed by governments on the banking sector. Many countries that have legalized and regulated cryptocurrencies are now requiring identity verification (KYC), which typically includes a residential address, from anyone who wants to open a cryptocurrency account. This requirement is consistent with traditional financial institutions’ anti-money laundering policies.

WHY IS KYC IMPORTANT FOR CRYPTO EXCHANGES?

KYC information allows a crypto exchange to conduct background checks to determine whether the wallet holder is likely to use the wallet for illegal purposes. If current proposals become law, the holder’s information could be used to report cryptocurrency holdings and transactions for income tax purposes.

Many online applications that require an identity check are now including automated identity verification as a convenient feature. Due to the nature of cryptocurrency exchanges, potential cryptocurrency investors are unable to submit their documentation in person at a brick-and-mortar location.

In the cryptocurrency space, the use of pseudonymous wallets for money laundering and other illegal financial transactions is a major source of concern. “Pseudonymous” accounts are those with fictitious names, nicknames, or other incomplete information that makes it impossible to identify the account holder. Ransomware, which extorts funds by freezing a person’s or business’s computer systems until a fee is paid, is one type of criminal activity enabled by pseudonymous transactions.

WHAT HAPPEN WHEN KYC IS NOT ENFORCED?

In May 2021, a group of hackers had access to the computer systems of Colonial Pipeline’s oil refinery in the United States. On the East Coast the company’s fuel distribution capability was completely shut down by the hackers, resulting in widespread fuel shortages, panic buying, and price spikes. Colonial’s systems were only unlocked after a ransom of 75 bitcoins was paid to a cryptocurrency wallet (approximately $5 million at today’s exchange rate). The bitcoins were quickly dispersed and were almost certainly converted to cash.

Naturally, governments and law enforcement agencies strongly advise victims of ransomware not to pay the criminals’ demands. Many organizations, on the other hand, have little choice if they want to return to service, and business insurance frequently covers the ransom and lost revenue. Criminal gangs and other bad actors may use crypto’s pseudonymous features to easily access and distribute funds stolen in future ransomware attacks now that they know this.

HOW DOES KYC BRING LEGITIMACY TO CRYPTO?

For example, if a client pays you in cryptocurrency, you may be required to report it and possibly be taxed by the government. Many jurisdictions now require the disclosure of cryptocurrency-related earnings on tax return forms. The Internal Revenue Service (IRS) in the United States considers cryptocurrency to be valuable property. Because a cryptocurrency’s mining generates value, that value is taxable. Any profits (capital gains) from the sale of cryptocurrency are taxable as well. The IRS will require reporting of any amount over $10,000 in cryptocurrency held in a personal wallet by US citizens, as the IRS taxes its citizens on their worldwide income and financial holdings, regardless of where they live.

Any cryptocurrency account holder wishing to send an equivalent amount of more than $10,000 to an offshore account in a single day must first complete a KYC registration. Large volume cryptocurrency transactions sent to or received from an offshore entity by US citizens would be reported to FinCEN for monitoring and law enforcement purposes, just like regular bank transfers.

The underlying premise of these proposed rules is that registering for KYC, disclosing total holdings, and reporting any offshore transactions will aid in the prevention of tax evasion and the financing of foreign criminal groups.

WHY DO YOU NEED KYC?

WHAT PERCENTAGE OF BITCOIN IS USED FOR ILLEGAL ACTIVITY?

The reality, on the other hand, is quite different. According to a recent Chainalysis report, only 0.34 percent of cryptocurrency transactions (worth $10 billion) will be linked to illegal activities in 2020. Furthermore, the amount of cryptocurrency used for money laundering is far less than the amount of cash laundered through traditional methods, according to a report published by the Society for Worldwide Interbank Financial Telecommunication (SWIFT). Traditional banks have been found guilty of willfully failing to fulfill their legal obligations to report suspected money laundering and terrorist financing. Certain banks have also been charged with failing to implement stringent controls, such as Know Your Customer (KYC), to monitor and control funds held at and moving through their institutions, both domestically and internationally.

The Panama Papers leak in 2016 sparked a wide-ranging investigation into offshore banks, which revealed that they served as “tax havens” for the wealthy, criminals, and corrupt. These funds could be held in secret accounts hidden from international governments to avoid paying taxes and being investigated by law enforcement in the countries where these individuals live. The vast majority of these offshore funds were held in fiat (government-backed) currencies rather than cryptocurrency.

WHAT DO CRYPTO EXCHANGES DO WITH YOUR KYC?

Consider the security features that come standard with traditional banking. When sending funds via traditional bank transfer, no personally identifiable information (PII) is required, and only the account and routing numbers of the sending and receiving bank accounts are required. To make the transfer, the sender does not need the PII of the receiving bank account holder, and the receiving bank account holder does not need the PII of the sender. However, due to the KYC rules imposed on banks, law enforcement personnel can obtain this information upon request, and transactions exceeding a certain threshold are reported to the governing authorities in the country where the bank is located, as previously stated. The sender and receiver’s PII and tax identifier are included in the transaction report.

For sending and receiving cryptocurrency transactions, a pseudonym, or randomly generated identifier, can also be used as the name of the wallet holder. This is the equivalent of using an email address that does not include your name. The originator and destination pseudonyms for cryptocurrency transfers could also be changed for each transaction, ensuring that no two transactions are easily linked to the same account holders.

One of the most appealing aspects of cryptocurrency transactions is the anonymity of the crypto account. Understanding the blockchain concept and the privacy features involved is critical when discussing KYC and pseudonymity.

Although no personally identifiable information (PII) about the cryptocurrency sender or receiver is stored on any node or in the blockchain ledger, the cryptocurrency exchange will have access to the sending and receiving account holders’ personal information under the proposed KYC rules. Not all exchanges, however, are rushing to implement these regulations. If they are based in a country without KYC legislation, some exchanges may operate on the dark web or simply refuse to ask for personal information.

Despite the fact that each wallet’s transactions are traceable and visible, hackers and other bad actors will move funds quickly through the nodes to cash them out before they can be flagged and investigated. During the transfer, the funds are frequently split up and “mixed” in with legitimate transactions, then distributed to multiple wallets, making tracking extremely difficult.

The funds obtained through hacking, ransomware, and scams are usually long gone by the time the end-destination wallets are tracked and identified. They could eventually be withdrawn as cash or used to purchase other untraceable, valuable, and anonymous items.

It’s difficult for law enforcement to stop and trace the flow of cryptocurrency obtained through criminal means without legislation to remove wallet pseudonymity or the ability to quickly freeze suspicious or fraudulent transactions. The best way for cryptocurrency account holders to avoid losing money due to scams is to only use exchanges that use Know Your Customer (KYC) technology and to remember the old adage, “if it sounds too good to be true, it probably is.”

Read Next: What is Crypto Cycle